Hashing and Probability of Collision 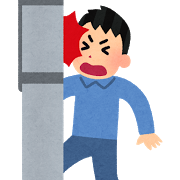 Problem D of Codeforces #395 required hashes of rooted trees. In this post I give some examples of good hashes and bad hashes, and then construct a good hash for rooted trees.

The most well-known hash in competitive programming is probably the rolling-hash of strings. The following problem looks stupid, but let's solve it using rolling hash anyway.

Problem 1. You are given two strings s, t of lengths N (<= 10^5) that consist of lowercase letters. Determine if they are the same.

Let MOD=10^9+7. Choose an integer r uniformly at random from the interval [0, MOD). Compute the sum of r^i * s[i] over all i. This is called the rolling hash of s. We can consider it as a polynomial of r, let's denote it as S(r). Similarly, define T(r). The hash collision happens when s and t are different strings (thus S and T are different polynomials), but unluckily S(r) = T(r). Here we use Schwartz-Zippel lemma:

Let P(x_1, ..., x_k) be a non-zero (multi-variable) polynomial on a finite field F_MOD. If the variables are chosen independently and uniformly at random, the probability that P(x_1, ..., x_k) = 0 is at most D/MOD, where D is the total degree of the polynomial.

In the case of rolling hash, we are only interested in single-variable polynomials. From the lemma above, we can prove that the collision probability is at most N/MOD (<= 1/10^4). Thus I'd say this is a "good hash". My intuition tells that in practice the probability is as small as 1/MOD, but that looks at least very hard to prove. Let me give an interesting example that shows the intuition is not always correct. In the lemma F_MOD must be a field, and MOD must be a prime. What happens if the modulo is not prime, for example 2^64 (this would simplify the implementation). It turns out that the rolling hash doesn't work well for a certain case if the modulo is 2^64. Detailed description on Codeforces.

It looks very hard to find a testcase against this hash. (Actually no - see Petr's comment below). However there's no theoretical guarantee under this hash and I think most people agree that this doesn't look valid as an intended solution of a problem in a contest (graph isomorphism is a well-known difficult problem). I'd say this is a "bad hash".

OK, now we want to construct a good hash for rooted trees. Before that, let's try an easier version. Hashes for (multi)sets.

One possible solution is to sort the input and then compute the rolling hash of it. Can you find a linear-time hash? The solution is indeed very simple. Let's take a random integer r from the interval [0, MOD), and compute the hash (r+a_1)(r+a_2)...(r+a_n). This is a polynomial of r of degree n, so again from Schwartz-Zippel lemma, the collision probability is at most n/MOD.

Problem 4. You are given two rooted trees with n vertices. Determine if they are isomorphic. 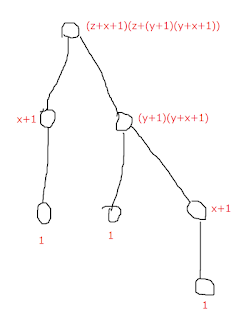 This way we get a multi-variable polynomial over d variables of degree l, where l is the number of leaves in the tree. We can prove that two polynomials that correspond to non-isomorphic trees are different (by using the uniqueness of factorization of the ring of polynomials). Thus, if we evaluate this polynomial for random variables, we get a good hash with collision probability at most l/MOD!